Danish try out grazing elephants on the moors 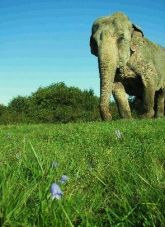 Big grazing animals, like Konik horses and Galloway cattle, can be useful helpers in nature management, nibbling away on annoying growth where open ecosystems are preferred. Danish ecologists went all-out in 2008: they let elephants graze a Danish nature area.

Faced with the news, outside experts could hardly believe their ears. Headed by ‘nature school’ director Morten Lindhard a small team of ecologists had three elephants grazing the Eskebjerg Vesterlyngen moors in the summer of 2008.

The dream of ‘rewilding nature’ has a long tradition, both in Europe and the U.S.A. In many European countries grazing cattle, horses, sheep and deer have helped considerably in removing unwanted bushes and trees.

Lindhard got fascinated by the so called megafauna extinction theory about mankind’s extermination of big wildlife in se tone age. Could elephant-like offspring of the famed mammoths still find an ecological niche in modern European ecosystems, he asked himself?

After considerable effort he convinced a German circus family to lend him three Jumbo’s - two Indian and one African forest elephant - and let them roam and graze the Vesterlyngen heather, an area plagued by unwelcome birches, bushes and other growth.

Says Lindhard: “Although the try-out was short (only three days) and by no means a true scientific experiment, it was a relaxed experience. We observed some interesting behavior and the animals seemed to have a great time.”

Other experts, like the Dutch ‘father of grazing theory’ Frans Vera, are critical. Elephants have never had a place in post Ice Age Europe. No sound ecological need to introduce them now, they say.

But Lindhard remains unconvinced. Modern European nature is totally different from anything we had before, anyway, he says. Maybe zoo and circus elephants could still be useful. And in the process have a vacation from their cramped day-to-day condition! Full story (in Dutch, with link to Danish)…