May Bambi miss the Train 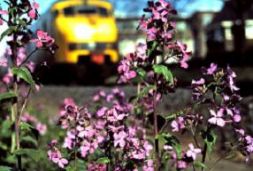 Each and every year millions of animals fall victim to road traffic. Trains do much less damage. Still, ‘defragmentation’ measures like ‘ecoducts’ must make our rail infrastructure less of a butcher’s shop.

A snap shot. Springtime afternoon on a local railway station in the South of Holland. Between the tracks a dove lies dead. Flew up too clumsily and got mashed by an Intercity, speeding past.

All of us have seen it: animal corpses on the road. Also, many can be found along railway tracks. Since the early nineties France and Germany have taken the lead in so called ‘defragmentating’ measures.
Most of them are so called wildlife passages, designed to re-link chunks of valuable nature that have become separated by infrastructural asphalt or steel. They offer plants and animal species fresh chances to proliferate along normal natural lines. They also prevent wildlife accidents, the cost of which add up to many millions of dollars, in the Netherlands alone. Insurance companies benefit: fewer damage claims come in. 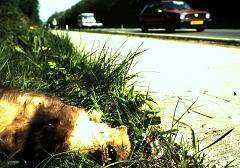 In the Netherlands some 2 to 5 million animals are killed by cars each year. In Belgian Flanders around 4 million die. That is to say: few reliable statistics exist, so computer modeling estimates have to be made from separate bits of local research and cadaver counts by road managing bodies.

And what about railways? Just like roads, they often are insurmountable obstacles for wildlife, as international research has shown. It’s not just that the animals get killed by traffic, they simply don’t dare to cross anymore. Or birds break their neck against transparent noise screens along the tracks.

In the Netherlands nobody else had done any comprehensive research, So we did the figures, a few years ago. Collecting official body counts and through interviews with dozens of train drivers.We were able to establish an estimate from anywhere between 71.000 and 135.000 animal train victims every year.

Railroads through nature reserves cause suffering among protected species, too. From India examples are known of elephants, tigers and leopards that got clobbered by trains. 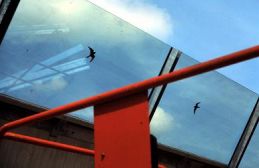 Nowadays ever more defragmentation initiatives take place along railways all over the world. Some countries, like India, have set speed limits through protected nature areas.

Elsewhere long fences along the rails keep animals out. Or ‘ecoculverts‘ are dug under the tracks. Or full scale ecoducts allow them to cross overhead.In Holland, near the town of Hilversum, Europe’s largest railway ecoduct, Nature bridge Zanderij Crailo, spans both a four lane road and a big rail emplacement.

The Dutch green bridge is 160 foot wide and 2.500 foot long. As it was only built a few years ago, nothing definite can be said as yet about its success in reconnecting the nature areas on both sides. One thing is certain, though: the bridge is being used extensively by all kinds of game and small wildlife.

Rooftop park
New York takes a different angle: an old elevated stretch of railway right through Manhattan has undergone an extreme makeover into “The High Line”, that is: the city’s latest rooftop park.

The world’s most spectacular defragmented railway trajectories can be found on Chinese territory. Underneath the Qunghai-Tibet and the Wudaolian-Qumarhe railways 33 animal tunnels and other wildlife passages are in heavy use, especially by the migrating Tibetan antelope Shatoosh. Where the Qunghai-Tibet railroad crosses the vast permafrost highlands, it has been built on concrete pillars, leaving over 3.000 ‘gates’ for the shatoosh to cross.