The heat is on, The beat too! Clubbing is becoming a way to ‘save the earth’ – or at least: to save some energy. The world’s first sustainable dance clubs are pointing the way towards a future green nightlife… (Photos: SDC/WATT)

Smack on a stone's throw from Rotterdam Central Station, where China Town meets the broad boulevard, Club WATT opened its doors almost two years ago. WATT was not just another fancy disco. A wide array of special measures made it the most sustainable club of our time.
Chilling out on a rooftop garden, having an organic bite or beer – and fine wines too! – or getting rid of the remains of your dinner on a composting toilet. WATT had it all! The ladies’ were even treated to a hallucinating ‘pee experience’. The toilets were being flushed with rain water harvested on the green roof, flowing through a transparent pipe system right overhead. 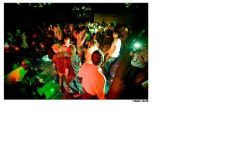 But we're talking past tense. Rock stage WATT had to file a bankruptcy request some days ago.  Rotterdam has been hit hard by the economical crisis and by social and political turmoil. The rock and cult scenes are tittering. WATT got plagued by too many quiet nights.

In visitors' numbers that is! The club itself was anything but quiet. While focussing on a hundred green gadgets, the owners had forgotten the traps of normal environmental legislation. The sound insulation of their club was sub standard. Repeated noise complaints forced the City to demand better insulation. But WATT lacked the money, and the town council voted against a rescue plan.

And so the future has become very uncertain for Club WATT, thus far the most spectacular of the new green dance club generation. But WATTis not the only one. In fact, the first one to open, in 2007, was another Rotterdam club, but more a cult type of thing.
Club Worm is a movable ‘plug-and-play’ rig, constructed for the gipsy young crowd – goths, squatters, hippies - who are often harassed from one place to the other and wanted a club they could pack up and reassemble in some other temporary refuge area.

C2C
Worm was constructed on cradle-to-cradle principles of reuse, by Rotterdam’s hippest architectural bureau 2012 Architects. They specialize in C2C-design, recycling all kinds of waste from other activities. Their latest stunt are scrapped wind turbine propellers for a children’s playground.
The Worm interior has been designed from 90 percent ex-waste, according to 2012. Couches from old tires, walls that used to be big ad boards. And, most fascinating, the separate loo cabins, made out of former tanks for liquid chemicals.

30 percent less
There’s a strange thing about clubbing. On the average a person going disco actually saves energy and water compared to one who remains at home couch potatoing in front of the TV set. But that’s not to say that clubs are CO2 neutral, so to speak. Not by a long shot!
A sizeable WATT type club consumes about as much energy as 150 homes (430 kWh) plus 10 million liters of water and produces around 136 tonnes of solid waste each year. WATT claimed a 30 percent reduction to those amounts.

SDC
And it didn't even use solar or wind energy, as does the small club Surya in London. But what both clubs did have in common is their ‘energy dance floor’. Not quite in common, though, cause whereas Surya’s floor uses so-called piezoelectricity to generate energy from the movement of dancing people, WATT’s floor was functioning on mechanical principles.
The WATT concept was thought out by a young Rotterdam consulting and innovation company, called Sustainable Dance Club (SDC; www.sustainabledanceclub.org), specializing in sustainability solutions for the pleasure industry. SDC itself is touring the global club scene with a portable version of the dance floor, both in Europe, Asia and on the American continent.

Indeed it was in the U.S.A. that a fourth green club joined the party in 2008: the Ecco Ultra Lounge night club in Hollywood, LA. Whatever the difficulties European green clubs are facing, Ecco (www.eccohollywood.com) is doing great in ever more eco-minded Hollywood. It does nog have ana energy dance floor (yet?), but ontherwise it is not unlike WATT: a nightclub, bar and restaurant, built with recycled or green materials like Forest Stewardship Council (FSC) certified timber, serving organic food and drinks, and using energy saving sound equipment and LED lighting.

Although the economical crisis has curbed the trend somewhat, many other ‘sustainable’ technologies within the clubbing circuit are cropping up all over the world for saving energy, waste and water. There is no stopping it: slowly but certainly, nightlife will turn green... 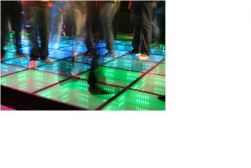