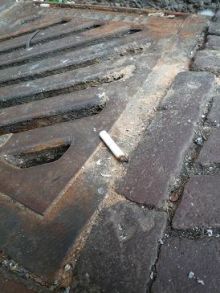 Apart from being a stinky eyesore, cig filter butts are toxic plastic waste. Few are smokers who realize the damage they’re doing when flicking that wee bugger away. Fewer still the policy makers hell-bent on ending this unnoticed threat to birds and marine life. Some relief could come from biodegradable filters.

A cigarette is sexy. Not so the sticky butt. Even for scientists, thus far, no glory was attached to such seemingly tiny ‘research topic’. But that’s in the past. Cause, as an environmental hazard, cig filters are turning out quite big.
The number of chemical residues in any butt is staggering. Some 4.200, according to The Chemical Components of Tobacco and Tobacco Smoke, a recent brick sized book by Alan Rodgman, reviewing all substances in smoked butts. Many are eco-toxic to some degree.

Non-degradable
What’s more: almost all cigarettes on the (western) market today are filter brands. That makes the butts even more nasty . For, contrary to what smokers like to believe, a filter is not a biodegradable paper waste flimsy. Filters are made of plastic, cellulose(di)acetate to be more precise. Although derived from wood chips, it is non-biodegradable.
The filter became popular under public pressure. Confronted with the detrimental health effects of cigarettes, manufacturers designed filters to capture some of the cancer causing compounds from the burned tobacco tar. But it was a deceptive move, as it enabled tobacco marketeers to allay people’s fears of smoking, thus encouraging them to smoke and inhale even more.
The net result was: no reduction of average tar intake per person and a staggering 4.500 billion poisonous butts in parks, waterways and oceans worldwide each year.

Fish die
The actual ecotoxicity to water organisms is still a matter of debate. Some modeling studies (Warne et. al.) suggest that the damage in open water ecosystems is really small. But in confined environments just one butt appears to be deadly. In a 1 liter bowl fish were even found to die from unsmoked filter material itself (Gersberg et. al.)!
Another worrying matter is ingestion of plastic items, such as filter butts, so deadly to birds and marine life (See: http://www.chrisjordan.com/current_set2.phpid=11). A biodegradable filter might help. Not against the chemicals leaking from cig butts into the environment, but against the unnoticed plastic waste of the butts themselves.
Recent public attention to the vast ‘plastic soup’ patches of polluted ocean has to some degree rekindled the discussion about cig butt waste as well.
But so far governments never push for it, afraid as they are to lose the income from tobacco taxes. They stick with supporting beach clean-up actions and the like – as do (surprisingly) environmental groups and the industry.

Biofilters
‘Big tobacco’ has failed to come up with a degradable filter. Sure, they tried. In the hey days of environmental activism, when the U.S. government threatened to end the usual landfilling of non-degradable waste, manufacturers scrambled to test a series of ‘green’ cigarettes, ranging from organic tobacco to ecofilters.
Some actually got top scores with consumers. But as the green storm abated, so did the innovative zest. By 2000 a combined effort by the industry’s common organization Coresta was shelved. The manufacturers couldn’t find an alternative that consumers liked, they claimed.
The only project still on the market seems to be the one announced in 2005 by the British/German bio-plastics producer Stanelco/Biotec. Although that patent, too, has been put in low gear, some quiet initiatives in Canada suggest that Stanelco has not quite abandoned the idea…