The sea stewards of Kayar 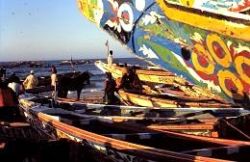 60.000 small fishermen in their piroques, hundreds of big sea going trawlers from African countrie, Russia, Europe and Japan. Who shall save the once abundant fish along the African Westcoast?

The Senegalese fishing community has taken the lead in its country, setting an example of a more sustainable practice from its beaches. Alarmed by the crazy decline of ‘their’ fish stocks the local families got together and with the help of international and Senegalese NGO’s they installed a revolutionary and rigorous system of self control.

Waiting…
Before the eighties, some 200 fishing boats plied their small scale trade from the town’s white beaches, jockeying the surf just a few miles out to sea. But then the dramatic Sahel inland draughts caused an invasion of bereft families seeking protein in the water where land no longer offered food.
Now the beaches are crammed with colorful boats going in and out, the people pushing or pulling them with a lot of shouting and laughing, while women and children sit in the sand, cooking their supper, trading catches or playing soccer. And everyone is waiting who will return from the treacherous ocean and who won’t. And who may have caught a few meager fish.

More with less
“Fish got less and less and smaller and smaller”, says mayor-fisherman Moussa Ndoye. “In spite of the swollen number of boats total seasonal catches dropped. At the same time we lacked means to preserve or transport what we caught. Instead of getting sold in bigger cities, fish lay rotting on the concrete.”
Kayar asked for help from the government and was lucky to get in touch with nature conservation multinational WWF and the Dutch embassy in Dakar. Together they figured out a system to “earn more with fewer fish”.

Fixed prices
Kayar has reserved an exclusive coastal fishing zone for its own fleet of piroques. Those who use nets are allowed only one trip a day. Murderous standing driftnets, indeed all unguarded nets are prohibited. Line fishing boats are only allowed a 45 kilo catch each day.
Control is partly an organized mutual thing, partly carried out by the coast watch, equipped with a few modest boats and a radar set in the Kayar head quarters. 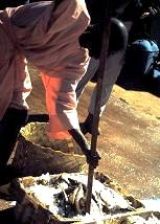 The Kayar fishermen mutually agree and hold on to fixed, relatively high prices – ‘for guaranteed quality’ and have trained themselves to better marketing strategies. A micro loans scheme intends to help fishing families to shift to other trades, like tourism.

Resolve
“It works”, Ndoye says: “The income has gone up again and other communities are beginning to follow our example.”
The road is not without humps. But at national level the message has come through as well. A pearl chain of coastal marine protected areas has been installed and fisheries inspection has been stepped up.
Together such measures have strengthened the government’s resolve to protect its silver riches. EU ocean trawlers no longer find it easy to wangle or buy cheap fishing rights from Dakar. Maybe Senegal’s fish still stand a chance…

Main story with links to related stories by Michel Robles: