Towards a trustworthy certificate

The explosively growing business of fish farming has come under heavy criticism. Sustainable solutions are being developed. But much work remains to be done.

Time was when critics of the present overexploitation of the world’s fish stocks thought that fish farming (aquaculture) would be the sustainable alternative. But in the past fifteen years the picture has changed drastically.

As long as fish farms were a small scale family business they seemed alright. But with falling wild stocks and a growing global market demand, the modest fish ponds have boomed into a massive industry.
In fact aquaculture is the fastest growing industrial branch of our time, much of which is taking place in China and South-East Asia. Nowadays almost half of the world’s fish consumption is from aquaculture, and – as with any bioindustry – severe ecological, environmental and animal welfare issues have emerged.

Run-off
Seaward coastal breeding basins have replaced mangrove forests, that under natural conditions serve both as a coastal buffer against flooding and as a nursery for innumerable wild sea life species.
Moreover they pollute their surroundings with run-off from the packed domesticated fish as well as a wide range of pesticides, antibiotics and other veterinary drug residues. Popular farmed fish like Tilapia and Pangasius even get stuffed with growth and other hormones in order to get them tasty enough to be sold. 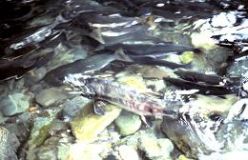 North American salmon farms were the first to come under scrutiny from green organizations, partly for their chemical run-off, partly because escaping salmon have genetically polluted the wild salmon in surrounding oceans.

Fodder
Some ‘farmed’ fish – especially eel – are in fact wild animals, caught at sea and raised in ponds, simple because they don’t spawn in captivity.
A pressing issue is the contribution if fish farming to overfishing wild stocks. Ever more predator fish species are being bred in captivity, requiring protein rich food, preferably sea food. Krill and ofther small species stocks are already being depleted to provide farms with fishy fish fodder.
Apart from that, a growing awareness of the suffering capacity of fish is fuelling an ever louder animal welfare debate around the crowded living conditions and painful killing methods in fish farms.

ASC criticized
Following the successful ‘sustainability labels‘ from the Forest Stewardship Council (FSC) for timber and Marine Stewardship Council (MSC) for wild fish, WWF and some big food and aquaculture corporate parties are now launching the Aquaculture Stewardship Council (ASC) label for farmed fish.
Setting up feasible criteria for judging and certifying fish farms is not an easy task. Even before the label was a fact interest groups of small ‘community‘ fish farms as well as human rights organizations and local green groups attacked the proposed ASC certification process for being too costly and therefore biased towards big farming corporations, “just like MSC” (see: www.mangroveactionproject.org).

Transparency
WWF spokespeople refute such claims, pointing out that many big market partners, necessary to make ASC a commercial success, support the negotiations towards the final ‘principles’ and criteria and that these round table talks are “fully transparent and open to all stakeholders”.
Furthermore, and contrary to the MSC label, ASC does incorporate environmental and labor conditions criteria. Even animal welfare aspects are being considered, WWF says.

Nevertheless, worldwide aquaculture expert Johan Verreth at the Wageningen University in the Netherlands does admit that traditional small farms may get in trouble if they fail to adapt to the present speedy technological and market developments.
“In the end the future probably lies with ‘closed‘ land based systems, that reuse or clean their own waste and energy”, Verreth expects. Wageningen University is actively developing such high-tech ‘recirculation aquaculture systems’ (RAS), he adds.