… or a political climate change?

Okay, the much heralded Copenhagen agreement as a sustainable solution on climate change has turned out an illusion. Now, what should environmental organizations do? For one thing: count their blessings. For another, redo their homework –better, this time…

It was to be ‘the last chance’ to save human kind and biodiversity. But last December the COP15 Copenhagen conference on climate change did not reach any binding agreement.

Of course, environmentalists widely blame the weak politicians, or the fossil fuel lobby that sabotaged the game. But actually they just had a weak case. What’s more, they failed to acknowledge it and staged an ill-founded hype around COP15. 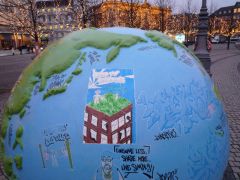 Most importantly, the scientists that most vigorously advocated the man-made global warming hypothesis, have not yet been able to deliver conclusive over-all evidence, whatever the dramatic changes in weather patterns in many regions of the world. Yes, permafrost and parts of ice caps are melting. But as to the causes and future developments, many fundamental questions remain.

In the eighties, when the climate issue made its first headlines, several important green organizations were looking for new self justification. Their leaders naively targeted the world’s most ruthless industrial sector – fossil fuels – without sufficiently developed scientific data or alternatives.

Activists and scientists got tied up in a mutual self propelling dance of climate PR and lost sight of political reality. So they failed and got a load of scandals about their scientific allies instead.

Nevertheless, Copenhagen did bring a spark of good news – thanks to a new generation of world leaders: for the first time all the major polluting nations did join hands to some degree. Yet, for the near future, innovative industries will be more logical partners than politicians on this issue. Activism and action should focus on proven local and regional climate problems and their sustainable solutions.

Regaining independence and realism are indispensible for both scientists and environmentalists, if any real green climate strategies are to come off.