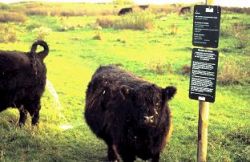 Looking for extravagance in nature management? Okay, the Danish experiment with circus elephants as grazers in a nature area is a tough one to beat. But undoubtedly Holland has the highest surprise density. Blame it on the high population density in a fertile river delta, where bricks, agriculture and our fellow species vi for room.

Let’s do a bit of (pre)history. Once mankind had entered the primeval marshy forested delta, soon a farm land patchwork ensued, creating a great varied habitat for many ‘new’ species. At the same time other wildlife was pushed back. Wolf, bear and lynx, aurochs, giant deer and beaver disappeared. Much to the relief of harassed smallholders, always dreading the damage nature could do to their frail shacks and crops.

But with the development of cities and a modern industrialized farming, biodiversity dramatically declined. A conservation movement and, in the eighties, daring ‘rewilding’ ideas arose. Fear for the wilderness has become outdated, ecologists reasoned, and holding on to every single species in our overcrowded polders makes for absurd ‘nature gardening’. Why not restore the wild to some of its stone age splendor? Let nature be its own keeper. Just a kick start, and then: hands off!

Ever since, Dutch biologists have spearheaded Europe’s spreading rewilding efforts. They were behind the European Union’s Natura 2000 nature areas network. And they reintroduced big grazing animals, so as to make prehistoric-like habitats return. Horses, sheep and various cattle races are being experimented with, each with its own grazing behavior, its specific ecological niche.

But none of the cattle live up to expectation. Some aren't self supporting, others don’t have the required browsing behavior or are too aggressive towards tourists their territory. So, again, Dutch ecologists are pushing the frontiers further, using DNA-profiling in an effort to re-breed a near-replica of European original wild cattle. These prehistoric cattle’s DNA is known. Now, half wild modern races are scanned for genetic resemblance to their ancestor. Next, the closest look-alikes will be cross bred until a good ‘TaurOchs’ retro race is born.

Plenty of eager Universities are involved. Part of the money comes from selling “wilderness steaks” from present nature grazing cattle. Impressive, isn’t it? Or is it? For if we must resort to clever eugenetics in order to let ‘nature be its own keeper’, we’re deluding ourselves. The new grazers – if we manage to forge them – will just be the next product of factory farming!

Soon they will be traded all over Europe, and beyond. Thousands, then more “superfluous” animals will end their lawn razing slave lives prematurely for the pot. Profit will supplant wilderness ecology as the foremost goal. And one day, the rewilding ecologists will look up and wonder: where exactly did we let the Devil buy our soul?