The art of nature protection in war 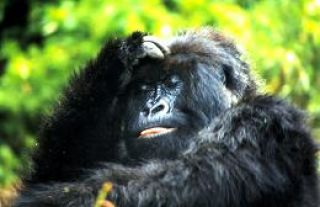 In times of war and floundering masses of refugees, quite often plants and wildlife suffer too. Nevertheless nature protection remains important under such circumstances, if only as an investment in post-war reconstruction.

Names they are bestowed upon like Ubwiyungwe (reconciliation) or Kubaha (respect). But some of the newborn mountain gorillas of the Virunga massif, spanning the border zones of Rwanda, Uganda and Congo, are also named optimistically. Like Twibuke (commemorate the victims), cause the park wardens from all three nations need startling courage to keep the gorilla habitat poacher free. 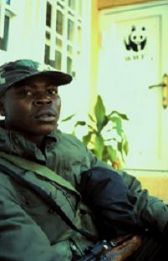 No less than 130 wardens have been murdered since the start of the “African World War” in the Great Lakes district in 1994. Officially the utterly rare biodiversity in the Virungas has been safeguarded by the fact that each country has established a National Park here. That should protect the world’s last remaining 700 mountain gorillas too, who hang out and live their lives in these jungles. Alas, the North Kivu Eastern province of Congo, are the stage for ever rekindled fighting, as are the bordering regions of Rwanda and Uganda.

Governments’ armies, rebel groups and gangs of common scum, all of those operate in the region surrounding these mountains. Many other African states and companies are active here, too. The main reason is the unparalleled riches in the soil, as well as the tropical hard wood, that is prime prey for many parties. Part of the scouring is pure self enrichment, part is motivated by the need governments feel to finance their countries’ development.

The anarchy that follows in the wake of this disaster, the rivers of refugees, the cutting down of trees for home cooking, trade (char coal) or just to make room for crop land, this anarchy has turned the Virungas’ forests in a fortress besieged from all sides.

Yet nature is of prime importance for the region in the long run, also economically. Natural resources are the foundation for any post war reconstruction. For the moment – when fighting is not too fierce – ecotourism is a much needed source of income.

Can anyone practice serious protection of natural systems in a situation like this? Similar dilemmas make for heated debates in ever so many other places of war, from Iraq to Guatemala, from Nova Zembla (Russinan nuclear waste dumps) to Israël (muc of that conflict is about water resources). War and military use often have dramatic consequences for nature.

A study published by the American NGO Conservation International has shown that 23 out of the 34 most important biodiversity hot spots on the globe have been plagued by fierce outbreaks of violence between 1950 and the year 2000. Over 80 percent of the most important armed conflicts were situated in ecologically prime regions.

Sometimes, nature itself becomes a deliberate target, as was the case by the defoliating poison attacks by the Americans in Vietnam. More often the suffering of ecosystems is more in the nature of collateral damage’. In any case when war rages, few pay attention to nature’s needs. Organisations and individuals who do are often attacked as trouble makers, traitors even.

On the other hand the presence of armed groups can sometimes curb uncontrolled plundering of natural resources. So there is an upside, too. What’s more, nature organizations are beginning to understand the dynamics of staying in business, even in war. The first ground rule is to remain stricktly neutral and very transparent in everything you do. Trust and credibility are absolute prerequisites if you want to keep being listened to.

A second rule is close cooperation between international organizations and local groups. The former serve as a safe shield for the small ones, who might otherwise be molested by irritated warlords. The locals on the other hand are the ones who speak the lingo and who know most about the situation on the spot. 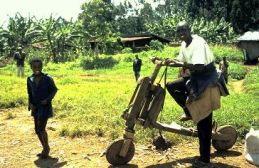 But the most important lesson learned for nature NGO’s is probably that they have begun to unfold into real and complete pillars for local economical aid, helping communities establish some foundations for a sustainable livelyhood.

Not all warlords are pleased. But helpfulness is an indispensable instrument for the just as invaluable local community sympathy for nature’s treasury.

NOTE: A more elaborate English version of this story is available on order by e-mail. Conditions to be negotiated