The upstream battle for ocean life 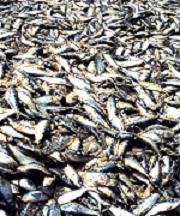 Are our oceans quickly turning into vast ecological slums, with a dramatically degraded biodiversity but full of free floating debris? One thing is certain: after some five decades of heavy overfishing, careless waste disposal and rising water temperatures, the seas around us have entered a in a state of siege.

Public and media awareness of the pending collapse of oceanic ecosystems is rising. But changing detrimental exploitation and political frameworks is an altogether different ball game.
We’re talking trillions of dollars. Both powerful economical sectors, such as fisheries, ‘Big Oil and Gas’ and governments (e.g. through income taxes and old boys’ networks) have large vested interests in overexploitation. Not to mention 2.6 billion of (often poor) people who depend on seafood for their protein.

Devil’s choice
Scientists and NGO’s mostly run up against rubber walls in their efforts to g et almost extinct fish species, like sharks and Bluefin and other tuna, politically protected. Traditional measures like catch limits on stocks or catch quota for national fishing fleets are mostly too lenient to ensure stocks’ long term survival. Control is too ineffective to prevent fraud. Even the more modern ‘marine protected areas’ in themselves often seem too little, too late.

Prospects are grim, as new economies are developing, with an expected steep rise in demand for seafood protein. Environmentalists therefore turn to consumers for critical mass. Activist groups like the Sea Shepherd have stepped up their mediamatic direct actions against unsustainable tuna fisheries in the Mediterranean. At the same time a number of ‘good fish’ labels and online guides have emerged.

But developing such tools is a matter of consuming trial and error, just when NGO’s and researchers are facing cutbacks all around. Quite often it amounts to a devils choice: you focus on one issue, so other ones remain unaddressed. Such dilemma’s lead to mutual haggling, eating up a lot of creative energy.

Greenwashing
Take the widely acknowledged Marine Stewardship Counsel (MSC) label for ‘sustainably’ caught fish. After initial praise, this initiative of the Worldwide Fund for Nature WWF and food multinational Unilever is now being criticized from many sides.

A ‘popular’, although rarely substantiated, objection is that MSC allows plenty of room for ‘greenwashing’ and fraud by those who have been certified. Critics say that MSC is overeager to certify big commercial fisheries in order to become accepted as ‘the’ standard.

Fishing companies get certified and porttay themselves as ‘green’ for, say their herring fishery, but at the same time may keep on catching other fish in totally irresponsible ways. Certifying bodies are vulnerable for corruption, as their services are paid for by the very companies they must certify. On top of that inspections on board are far too sparse to prevent fraud at sea, the critics say. 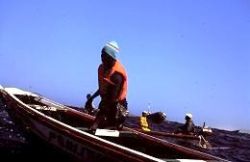 The high costs of getting certified keeps small fisheries and community fishing out, thus giving already wealthy fleet owners and traders an even bigger competitive edge. This way small ones pay the price for ‘greening’ world fisheries, critics proclaim.

Thirdly, a range of social and environmental aspects of the fisheries industry is not taken into account by MSC. Fair trade and good wages and working conditions in the fish product chain, for instance. Or fuel choice and pollution by fishing boats.

WWF and MSC do know of such criticisms. MSC has put a special Developing World Fisheries Program in place, in order to enable community and small fisheries in poor regions to get a valid MSC certificate too (www.msc.org).

Contaminated
Finally, though, MSC and other labels have by and large ‘forgotten’ one other consumers’ prime interest: clean healthy food. Fish may be caught sustainably, but isn’t it polluted? In fact, precisely some of the big most threatened fish of prey like tuna, eel, and sharks definitely are!

In America the Environmental Defense Fund’s ‘health alerts’ (www.edf.org) and the Monterey Bay Aquarium Seafood Watch program are addressing the poison-in-fish issue through good advice. But MSC, for now, has chosen to focus on the “bigger problem” of overfishing.

European food authorities and most green NGO’s deliberately play the poison problem down, promoting instead the consumption ‘more fish’, because of the alleged (albeit scientifically questionable) superb health advantages of omega-3 fatty acid consumption.

Pocket guide
There are exceptions. One is the fiercely activist Sea Shepherd group, another the young Sea First Foundation. Also Greenpeace has tackled the polution issue in its fight agains dolphin (not a fish) slaughters in Japan. but on the average the greens don’t want to antagonize the fishermen more than they already have. Governments protect the fishing business (and their own tax incomes), claiming they want to avoid an unnecessary panic over poison in fish.

In the Netherlands the North Sea Foundation (Stichting De Noordzee) publishes a yearly pocket guide called ‘Viswijzer’, a word play roughly to be translated as ‘Fish (ad)wiser’. But nothing is said on possible contaminants. (www.wnf.nl/viswijzer/) 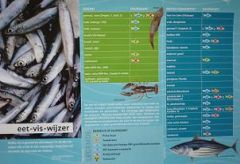 Therefore, in cooperation with the Belgian/Dutch scientific Eos Magazine, I have developed an extended pocket guide, called Eet-vis-wijzer (Eat-fish-(ad)wiser), in which both aspects are combined (Dutch language download  here or at at: www.eosmagazine.eu).

It’s the very first of its kind in Europe. But still it’s only a journalist’s product, based on - sometimes terribly fragmented - scientific reports and on a range of less rigorous sources. Apart from being the best tool to date, it is best considered as a reporters challenge to governments and NGO’s: hey guys, wasn’t it about time provide consumers with thorough information on pollution in the seafood they buy?